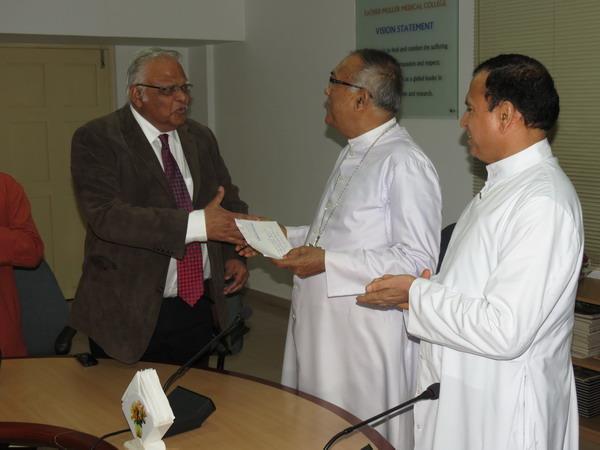 Catholic Association of South Kanara (CASK) presented a high-end Minus 80 degree Deep Freezer to Father Muller Medical College Blood Bank, as part of the former’s projects to mark its centenary. Bishop Aloysius Paul D’Souza, President of Father Muller Institutions, and also Patron of CASK, inaugurated and blessed the new Deep Freezer at the Blood Bank on December 9, 2013. Dr. Derek Lobo, President of CASK, and Mr. Vivek Aranha,Pune-based Mangalorean and Head of Rosary Education Group of Institutions, who had funded the new Deep Freezer through CASK, jointly presented the Rs. 6.25 lakh cheque to the Bishop and Fr Patrick Rodrigues, Director of Fr. Muller Institutions.

According to Dr. Hilda Fernandes, Head of the Pathology Department, Minus 80 degree Deep Freezer, manufactured by Terimo Penpol, is used to preserve Fresh Frozen Plasma, Cryoprecipitate, Single donor Plasma for up to five years. It has a capacity of preserving more than 500 units at a time. These blood components are used for Hemophilia, Bleading disorders, Vitamin K deficiency in children and chronic liver diseases. These are also used for Plasma pheresis.

Speaking on the occasion, the Bishop thanked Mr. Aranha for the goodwill and generosity and CASK for channeling this to the Blood Bank. He exhorted the hospital to reach out to the poor and needy beyond Mangalore and extend its services to the rural areas of the district and beyond without considering the caste and creed of the prospective recipients of such services.

Dr. Derek Lobo stressed the importance of blood and organ donation and lamented that thousands of healthy organs from dead people are daily buried or burnt in India, when such organs can save lives. He said that though India has the highest number of people aged 20-50 who can donate blood, the country has a short-fall of 3 million units of blood annually. We also lack adequate facilities for proper preservation of blood and blood products. He noted that it is part of CASK’s centenary core agenda, to promote blood, organ and body(cadaver)donations in collaboration with Father Muller Medical College. He said that in India only 20% of the blood collected is broken down into blood products such as plasma, platelets and red blood cells, whereas in the Western countries they have stopped using whole blood; only blood products are used. The high-end deep freezers like the one being donated ensured proper storage of plasma and other blood products over a long time. He also said that CASK is promoting the idea of full body donation for medical study and research as also organ donations for transplantation. He assured CASK support for expanding the eye bank services of the hospital to enhance its monthly cornea transplants from the present 20 to 60.

Responding, Fr Patrick thanked the donors of the deep freezer and briefed on the hospital’s outreach programme, including the acquisition and refurbishing of a hospital at Tumbe which is much patronized by rural people from Bantwal and Puttur taluks and a boon to trauma cases, specially for highway accident victims. He noted that rural outreach centres are being set up in non-urban areas. Fr Rodrigues said that body donation movement is catching up and noted that though prospective donors went through the legal formalities, their relatives, after the death of the donor, are reluctant to go by the wishes of the donor.

In his remarks on the occasion, Mr. Vivek Aranha offered further help to the hospital, including through Pune Rotary Club of which he is going to be the Governor next year. He specifically offered to fund the starting of a Skin Bank in the hospital which greatly benefits Burn cases and providing a mobile mammography van which will cover girls and women from puberty onwards for early detection of breast cancer. It would be equipped to detect breast cancer without having to touch the person being probed.

Captain John Prasad Menazes, Honorary Secretary of CASK, recounted the genesis of CASK’s association with Father Mullers and updated on developments in USA in support of the hospital and college. Detailing, he said that the through the Fr Muller Charitable Foundation in USA, CASK has been able to lobby and secure a grant of approximately Rs.6 lakhs for improving the infra-structure for corneal transplants, thereby facilitating an increase in the number of corneal transplants at Fr Mullers.