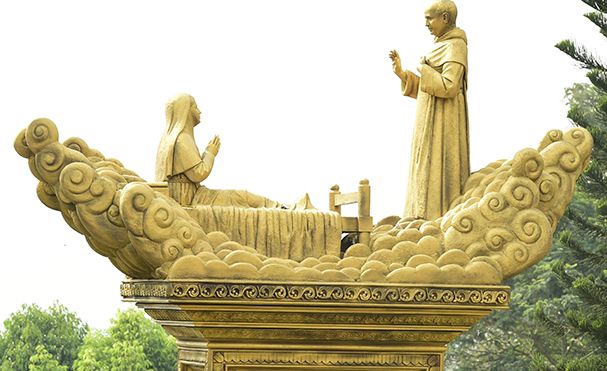 Maria Rose, 9, watched from the front row of pilgrims at the St Peter’s Basilica in Vatican when Pope Francis canonised Kuriakose Elias Chavara. The girl from Pala in Kottayam district in Kerala was born with squint eye, which Chavara set right—a miracle approved by the Congregation for the Causes of the Saints.

Chavara, in fact, had brought light to many lives when he was alive. He wanted people to be rid of “jnana kurudatham (intellectual blindness)” and thought education was the only way to it. In 1864, when he was the vicar general of the Syrian Catholic Church, he directed the 167 parishes under him to start a school each, which was a steppingstone to Kerala’s achievements in literacy and social equality.

Born in 1805 at Kainakary in Alappuzha, Chavara became a priest in 1829. Though soon he chose a monastic life, he refused to confine himself to spirituality. He started a Sanskrit school at Mannanam in Kottayam in 1846 and let students of all faiths and castes attend it. It was sort of a revolution
at that time.

He took special care of the depressed classes, educating them and giving them midday meals in schools. He was the first to let them be buried in cemeteries.

Chavara had identified the potential of printing very early. In 1846, there were only two presses in Travancore—the CMS press in Kottayam and the government press in Thiruvananthapuram. The Protestant priests who owned the CMS press did not allow him to see their press. So he travelled to Thiruvananthapuram and studied the government press. Returning to Mannanam, he found a carpenter and made a press in wood. It was on this press that Kerala’s first daily newspaper, Nasrani Deepika, was first printed.

Despite his resolute loyalty to the Vatican and friendship with European priests, Chavara wanted to keep the values of the Indian church. He started India’s first indigenous Catholic religious congregation, Carmelites of Mary Immaculate, in 1831. “He was not much influenced by foreign missionaries,” said the Reverend Benny Sebastian Thottanani, principal, Kuriakose Elias College, Mannanam. “India is a wellspring of spirituality and Saint Chavara’s beliefs were nurtured by the cultural heritage of the land. It is evident in the fact that the first educational institution he started was a Sanskrit school.”

Chavara started an order for women, the Congregation of the Mother of Carmel, in 1866. Euphrasia Eluvathingal, who was canonised with Chavara on November 23, belonged to the CMC. Born Rosa in 1877 at Arnattukara in Thrissur, she lived a life dedicated to prayer and gave a healing touch to those who approached her with their problems. She died in 1952 and was buried in Ollur, Thrissur. The only other Indian to be canonised by the Vatican is Saint Alphonsa, who also belongs to the Syro-Malabar Church.

Chavara died on January 3, 1871 at Koonammavu near Kochi and was buried there. His mortal remains were transferred to Mannanam in 1889. In Koonammavu, he had planted a mango tree. When it started yielding fruits, he sent the mangoes to the parishes and asked them to grow mango trees. Since the mangoes came from the prior, people started calling them prior mangoes. Many of these trees are still in fruit, just like the many institutions he started.