Latest News
Home Think Tank How much change can Pope Francis bring to the Catholic Church?

How much change can Pope Francis bring to the Catholic Church? 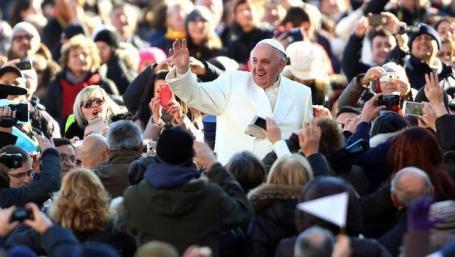 Image from Post Regarding How much change can Pope Francis bring to the Catholic Church?

The “mass appeal” of Pope Francis was on clear view as he celebrated Easter at the Vatican this morning. Popular as he is, he is still just one man, and the church he leads is large and complex. Mark Phillips reports from Rome:

It’s not too much of a leap of faith to think of the Catholic Church over the past few decades as a big multi-national corporation in trouble — its product no longer selling like it once did, its reputation tainted by the whiff of corruption and scandal.

It did, after all, do what big businesses in trouble do: Its CEO announced he was retiring.

Its board of directors was called in to appoint new management, to try to restore the appeal of its products — to re-launch Brand Vatican.

And Pope Francis is its face. In just over a year since the election of this outsider from Argentina, who was given a papal mitre and a figurative broom to sweep out the ecclesiastical cobwebs, the Catholic Church is a place transformed.

“The change in the image of the papacy and the Vatican throughout the world” in one year, said Father Robert Dodaro, who teaches early Catholic philosophy at Rome’s Pontifical Lateran University, “is nothing short of remarkable.”

But a church riven by internal conflict and laboring under the shame of its priestly child-abuse scandal — which Pope Francis again addressed earlier this month — is still waiting to see what substantive changes this “Pope of the People” might bring.

“So the question comes up then: what’s changed really?” asked Phillips.

“Nothing,” Father Dodaro replied, “unless you think style is a lot more important than content — and a lot of people do.”

It is the now-familiar change in the style of this pope that has made him such an international headline-getter: The pope who rejected the lavish papal residence in the Apostolic Palace, to live in a simple three-room apartment in the Vatican’s clerical guest house.

The pope who carries his own bag, and who travels, not in a limo, but in a reasonably-priced car.

The pope who washes the feet even of non-Catholics, and who is more likely than not to give a kid a lift.

But all this atmospheric change has raised expectations that other changes must surely be in the papal pipeline.

This is the pope, after all, who when asked about his attitude toward homosexuals, did not echo the Catholic line that they had an “intrinsic disorder.” Instead, he asked, “Who am I to judge?” Ears pricked up.

Was the Catholic Church about to reconsider its positions on gays? On divorce? On birth control? Well, yes and no.

But if you’re gay, or if you’re divorced, and you feel yourself ostracized by the Church, the “welcoming” stance of the Church hasn’t really changed, according to Father Dodaro.

Still, Francis has raised expectations of change in at least one area — the complex theological quagmire of the Church’s response to Catholic couples who divorce and then re-marry. It is anticipated that they might be accepted back into the Church.

Will it happen? “I don’t know,” he said. “Pope Francis wants this debate to take place. That’s remarkable in itself.”

It’s remarkable because Francis is no theological revolutionary. He’s the product of a College of Cardinals selected by the two previous, very conservative popes, Benedict and John Paul II. Radical reform of Church doctrine is not what they had in mind when they chose Francis.

Longtime writer on Church affairs Massimo Franco thinks the popular view of Francis as a potential reformer may be based on wishful thinking.

“The major paradox with this pope is that he’s wearing the clothes that other people want him to wear,” Franco said. “But I’m not sure that they are the clothes he wants to wear.”

“So he’s still a very traditional man in terms of doctrine?” Phillips asked.

“I think he is a traditional man,” Franco replied.

But Francis is a traditional man who doesn’t come from the Roman tradition, or even the European one. In fact, much of his appeal is based on the fact he is an outsider, who has no stake in the mess at the center of the Church.

Francis’ problem is the Vatican. He was elected by cardinals to fix this place — its bureaucratic jealousies, its financial corruption, its sense of isolation from the real world where the Church should be doing its work.

And it’s still Francis’ problem, because there are parts of this place that don’t want to be fixed.

Already there is grumbling that Francis doesn’t understand how the Church’s powerful administrative structure — the Roman Curia — really works; that he doesn’t value the Cardinals who run its various departments or appreciate the work they do.

“Is he running up against opposition within this place to the changes he’s trying to make?” asked Phillips.

“These cardinals who are working in the Roman Curia are seasoned Church bureaucrats,” said Farther Dodaro. “So there’s pushback, yes. Now, is that significant? I think not. You’d have to be naive to think you were going to come in and reform the Roman Curia and everyone was going to applaud you.”

“And they wouldn’t squeak.”

There’s also irony. The Church may have needed Francis, but he needs the Church. If he doesn’t get the Vatican on his side, reform it in his image, he won’t be able to single-handedly turn the Catholic Church into the more welcoming, more merciful place he says he wants it to be.

“Francis knows very well is that he can win worldwide only if he wins in Rome,” said Franco. “If he doesn’t win in Rome, then he cannot win worldwide.”