How Pope Francis, tolerant but rigorous, is winning hearts and minds 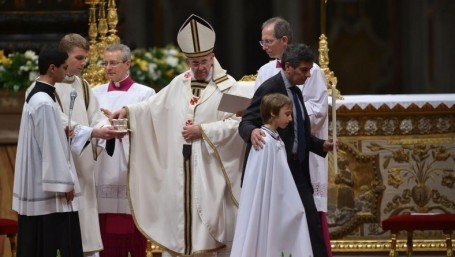 Image from Post Regarding How Pope Francis, tolerant but rigorous, is winning hearts and minds

Fifteen months ago, Cardinal Jorge Mario Bergoglio had chosen his room in a home for elderly Argentine priests. Like other Roman Catholic bishops who turn 75, he had submitted his retirement letter to the Vatican. Then another abdication upended his plans: Benedict XVI, his stamina fading, was the first pope in 598 years to leave by resignation, not death. On March 13, 2013, Bergoglio’s peers elected him pope on their fifth ballot.

He took the papal name Francis to evoke Francis of Assisi, a 13th-century saint whose time with Roman beggars at St. Peter’s Basilica had converted the silk merchant’s son to a life of poverty. The new pope, an accountant’s son, opened with a subdued, servile request to the throng in St. Peter’s Square, and to the world’s 1.2 billion Catholics: “Before the bishop blesses his people, I ask you to pray to the Lord that he will bless me.”

The world noted his humility, that rarest of leadership traits. In the succeeding year, his warmth, informality and spoken tolerance have made him a living oxymoron: a religious celebrity, even to many nonbelievers and other non-Catholics. As of this, his second Easter as pope, Francis has achieved a breakthrough that each of us can evaluate but none of us can deny: Some of those who have disliked the Roman Catholic Church now find themselves liking this first man from the Americas to lead it.

The sheer global heft of his church — if it were a nation, only China and India would be more populous — makes it, and its leaders, objects of spiritual but also secular inquiry: In the U.S. and many other lands, Catholics and their institutions are the biggest private providers of education, health care and charity. What’s more, if only for lack of competition, a pope is the closest thing Earth has to a globally recognized voice on social issues — a head-turning distinction guaranteed to make his official pronouncements tumultuously controversial. Francis has the power to provoke planetary conversation, as with his oft-quoted statement last summer that “… if a homosexual person is of good will and is in search of God, I am no one to judge.”

More than his immediate predecessors, Francis has used that limelight to lobby for service to the millions of impoverished people marginalized from thriving economies. The former cardinal who routinely trod miserable and dangerous alleys of Buenos Aires, communing with the least of his flock, today demands more than generous donations and noble sentiments. He wants gritty, hands-on action. Whether you’re of the Catholic or any other persuasion, or of none at all, Pope Francis hopes to change how you spend your weekends. “I prefer a Church which is bruised, hurting and dirty because it has been out on the streets,” he wrote in a November mission statement, “rather than a Church which is unhealthy from being confined and from clinging to its own security.”

The companion to this emphasis on helping the poor is his evidently heartfelt outreach to those hurt or angered by agents of his church. He has apologized and welcomed those estranged from Catholicism without changing church policies that critics condemn as rigid and restrictive. His compromise, essentially, is to stick to church teachings on controversial issues but to stress, by word and deed, Gospel messages of kindness and compassion. Earlier this month, the paradox showed vividly:

Francis made headlines with unscripted and unequivocal words, taking personal responsibility and asking forgiveness for the “evil” committed by clerics who molested children. He acknowledged the “personal, moral damage carried out by men of the church” and pledged stronger (if unspecified) punishments.

Two days later, he used equally unequivocal words to reaffirm that he is not rewriting Catholic doctrine: “It is horrific even to think that there are children, victims of abortion, who will never see the light of day.” And while his love for gays as children of God is a recurring theme, so is inflexibility on same-sex marriage (“anthropological regression”).

These complexities — the welcoming pastor, the rigorous shepherd — still are settling in ways that liberal and conservative Catholics struggle to parse; it can be tricky to square Francis’ humane sensitivities with his enduring imperatives. In naming him its Person of the Year, Time magazine synthesized the conundrums in a passage worth airing at length:

The papacy is mysterious and magical: It turns a septuagenarian into a superstar while revealing almost nothing about the man himself. And it raises hopes in every corner of the world — hopes that can never be fulfilled, for they are irreconcilable. The elderly traditionalist who pines for the old Latin Mass and the devout young woman who wishes she could be a priest both have hopes. The ambitious monsignor in the Vatican Curia and the evangelizing deacon in a remote Filipino village both have hopes. No pope can make them all happy at once.

This pope signals no intent to aggravate, or to appease. Francis, after all, says he joined the Jesuits — aka “God’s Marines” — because that order was on “the front lines of the Church, grounded in obedience and discipline.” If you follow not only news coverage of him but also his words, you sense a man aware that while he is pope, he is but the 266th pope — the fleeting guardian, we’ve written, of multimillennial values in a culture prone to preach that what’s new is therefore good.

Pope Francis relentlessly prods all of us to think beyond our privileged First World concerns. On this feast of Christendom, it will be an Easter surprise if he doesn’t remind us anew of our obligation to our fellow humans who suffer in Third World poverty. Whether each of us checks the box for Catholic, for another faith or for none, Francis appeals to our better angels. And he does so in ways that many people find, well, appealing.