In Another Groundbreaking Act, Pope Francis Confesses His Sins in Public 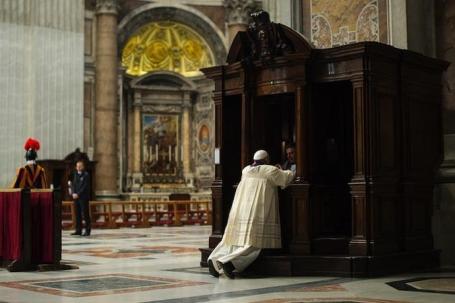 Image from Post Regarding In Another Groundbreaking Act, Pope Francis Confesses His Sins in Public

Pope Francis continued his rock star turn yesterday by breaking with tradition and publicly confessing his sins while leading a penitential liturgy in St. Peter’s Basilica.

The pope, dressed in a simple white alb and purple stole, spent about three minutes kneeling before the priest’s open confessional and received absolution. The priest also clasped the pope’s hands and kissed his simple silver ring.

As we noted, just days ago, Pope Francis, who had made the cover of Rolling Stone, promised Jersey Vargas, a ten-year-old girl, that he would mention immigration reform in his meeting this week with President Obama. Specifically, Vargas was appealing to Francis on behalf of her father, Mario Vargas, who is in the process of being deported.

The plea, at least in the short-term, worked. Around the same time that the Pope was confessing his sins, Vargas walked free.

Mario Vargas was freed from a detention facility in Louisiana after he posted $5,000 bond. A relative who saw the girl on television pleading with the pope during a public audience helped with the funding, said his wife, Lola Vargas.

Vargas will reunite with his family for the first time in two years while they await the ruling of an immigration judge in the outcome of his deportation case.