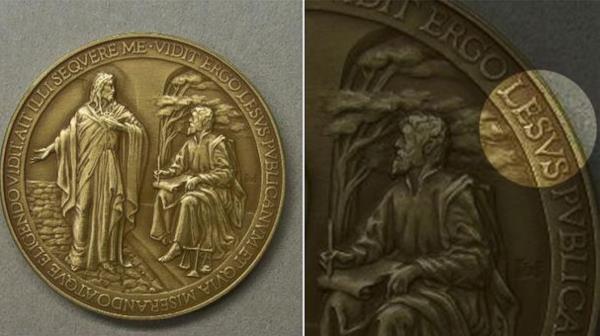 If anyone should get the spelling of Jesus’ name right, it should be the Vatican. Yet Jesus’ name was misspelled on thousands of medals commemorating Pope Francis’ ascension to the papacy, forcing them to be pulled back.
Medals are often minted for a new pope and they’re a popular collector’s items for people around the world, but upon looking closely, it appears that there was a big mistake on the new coins. The medals name the Christian savior as “Lesus” in an inscription on the edge.

The medals were already struck in gold, silver and bronze by the Italian state mint before anyone noticed the glaring mistake. The coins were put up for sale on Thursday. Now the Vatican has called them back. It withdrew 6,000 of the accidental medals from sale. However at least four people got their hands on the medals with the mistake before they were recalled. The flawed coins could be very valuable for those who got them because of the error.
The medals show Pope Francis and contain a phrase in Latin which was his inspiration to become a priest. The phrase deeply affected him when he heard God calling him to the priesthood when he was 17. The phrase should read “Jesus therefore sees the tax collector, and since he sees by having mercy and by choosing, he says to him, ‘follow me’.” However “Jesus” actually says “Lesus” on the medal.

It is perhaps for this reason that the term “Printer’s Devil” – meaning a young worker below the level of apprentice in the printing office – has been a convenient scapegoat for errors in printing.
Taking this forward, if the Devil can infiltrate the Vatican and Papacy, what about us – the lesser mortals?