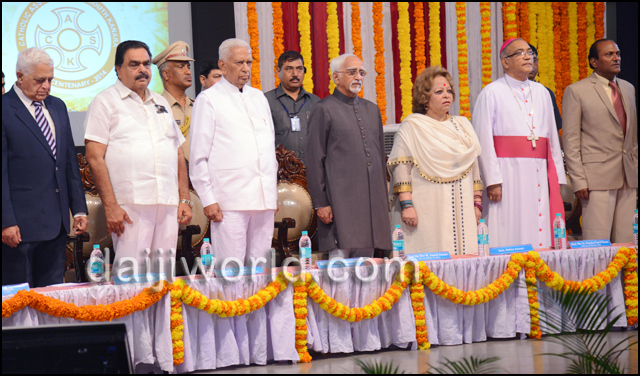 Mangalore, Sep 21: “The Catholic community in India has been an important part of our country’s social mosaic. Members of the community are fully integrated in the national mainstream. They have served the nation with great distinction in every sphere of life. The Christian faith has strengthened our secular fabric and enriched our composite Indian identity,” said Vice-President of India Mohammed Hamid Ansari.

He was speaking at the valedictory of the centenary celebrations of Catholic Association of South Kanara (CASK) at Milagres hall here on Sunday September 21.

Expressing his happiness at being part of the event and thanking retired IFS officer and former ambassador Eric Gonsalves for inviting him, the Vice-President said, “As the CASK completes a hundred years of existence, it must be commended for establishing itself as a vibrant institution for promoting general welfare of not only the Manglorean Catholic community but all segments of society in this region.

“I understand that the Association has provided valued services to the people in the field of health and education, especially to the deprived and marginalised sections of society, irrespective of religion, caste or creed. It has also focussed on supporting the local culture, including Konkani language and literature, music and fine arts. Above all, it has been an effective vehicle for uniting the community and providing it a coherent voice on issues of interest and concern,” he added.

“Our land is blessed to have almost all the great religions, coexisting peacefully and prospering here, for centuries. Christianity is one of the great religions of the world. We received its divine message in 52 AD when the Apostle St Thomas is believed to have landed in the Malabar coast,” he said.

He further added, “The contribution of the Christian church in social and charitable work in our country, especially in education and health sectors, has been particularly noteworthy. The CASK has carried forward the rich legacy of selfless public service inspired by the message of Jesus Christ who, over two thousand years ago, spread the truth of fundamental unity of mankind and preached the cherished human values of love, compassion, forgiveness and charity. It is for this message that Mahatma Gandhi called Jesus Christ the greatest teacher humanity has ever had.

“Our country faces many challenges, of which none is bigger than poverty and unemployment. The CASK could look into expanding its areas of work from health and education to skill development and employment generation. Every contribution, irrespective of its scale, would go some way in addressing this scourge of poverty which afflicts a very large percentage of our population.

“I applaud the CASK for the outstanding work over the last century. I am sanguine that it will continue on the same path of selfless service for the next hundred years and beyond,” he said.

He congratulated the patron of CASK Dr Aloysius Paul D’Souza, the office-bearers and members of the Association and wished them good luck for their future endeavours.

Karnataka governor Vajubhai Rudabhai Vala said, “Our country has a lot of diversity in terms of language, religions and cultures. Still, there is unity in diversity. All those who live in India, irrespective of caste, creed or religion, are sons and daughters of Bharat Mata.”

Lauding CASK for the service it has rendered over the past century, he said, “There are few associations like CASK that has rendered public service of this magnitude for the last 100 years. I congratulate the association on completing its 100 years. Serving the public plays a significant role in the life of a human being. This association as well as the Christian community at large has educated so many poor students and extended medical aid to those in need. The community has recognised the potential of students who have been educated in its instritutions and made their lives fruitful, and enabled them to lead a dignified life.”

“The priests and others who have served in CASK have been service-oriented and dedicated. They are devoted to educating children. This event is not just about listening to the good things CASK has done, but about inculcating those good things in our lives. It is time we also take up the work of serving the country.

“All religions convey the same message – to work for the prospertity and well-being of all people. If any religion points out another religion’s wrongs, then that religion is not for humanity. All gods give same message of serving humanty. We should unite for the progress of the country and prosperity of the lives of the people living in the country,” the governor said.

Bishop Dr Aloysius Paul D’Souza in his address said, “CASK has lived a 100 years with the blessings of many and it has established itself well, proving to be a fruitful blessings for the people. I wish that it grows stronger and lives to be another hundred.”

“This association has moved forward well with the blessings of the founders and rendered meaningful service to society. CASK is a cultural entity, which has work not only for the prospertity of the Catholic community but extended its unconditional help to other communities to prosper in the region. We have also acted as catalyst for the growth of other communities in the arena of education,” he said.

“The community has established lots of educational institues like Father Muller, St Agnes and others, and educated the people of the region. It has facilitated the people here to grow socially and intellectually. Because of its work, the community and in turn the association are recognised throughout the world. We should be service-oriented, duty-conscious, and work towards the integrity of all communities,” he added.

A book on Mahatma Gandhi titled ‘Gandhichem Parzollik Fuddarponn’ by J V Carlo, a Konkani translation of ‘Gandhi’s Outstanding Leadership’ by Pascal Alan Nazareth, published by Kavita Trust was released by the bishop. Publisher and poet Melvyn Rodrigues was present during the occasion.

Prof Geralyn Pinto recited a poem. A hundred scholarships were awarded to deserving candidates by CASK.