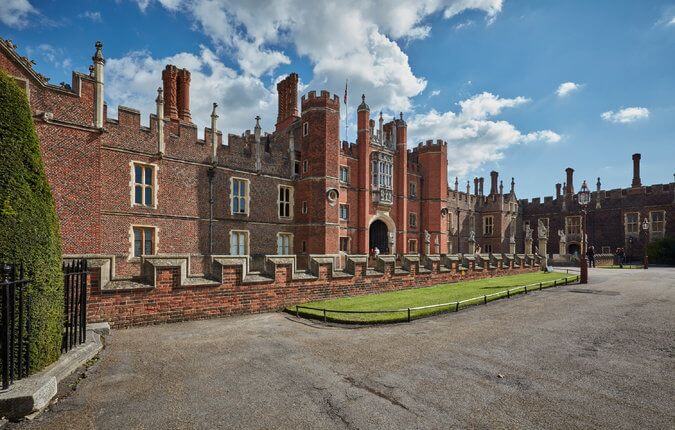 Hampton Court Palace, near London. In 1530, King Henry VIII sent the first letter threatening to break off ties with the Catholic Church in Rome from the palace. Andy Haslam for The New York Times

LONDON — “Henry VIII will be spinning in his grave!” said the headline in The Daily Mail, a British tabloid.

Hampton Court Palace, where the Tudor king Henry broke off ties with the papacy in 1530 just to divorce his first wife and marry his mistress — with whom he was besotted and whom he later beheaded — on Tuesday held its first Roman Catholic service in more than 450 years.

During the service, held in the palace’s Chapel Royal, chants in Latin from an 18-person choir swelled up toward turquoise ceilings, adorned with golden stars and gilded cherubs. Around 350 attendees were packed into tiny wooden pews.

A procession of altar boys and priests solemnly made its way toward the front of the chapel, as the scent of incense wafted across the ancient hall. The medieval Latin chants date back to before the Protestant Reformation, when they were heard throughout churches in Europe.

The service symbolized in part a growing reconciliation between the Church of England and the Roman Catholic Church. Both are grappling with internal divisions, including a battle over homosexuality, and the service comes as several high-profile figures, including some members of the royal family and former Prime Minister Tony Blair, have left the Anglican Church. (In 2011, a ban on a British monarch’s marrying a Roman Catholic was lifted after more than three centuries, but Roman Catholics are still barred from taking the throne.)

For his part, Pope Francis announced changes last year that were intended to make it easier for Roman Catholics to get annulments and remarry within the church, and he will soon meet with the head of the Russian Orthodox Church in what will be the first meeting between leaders of the two churches in almost 1,000 years.

Amid the backdrop of change in both churches, the pope’s personal preacher, Raniero Cantalamessa, led a prayer at Westminster Abbey in the presence of Queen Elizabeth II in November. He told his audience in London that Roman Catholics should celebrate Protestantism and “benefit from its achievements.”

The schism dates to 1534, when Henry VIII declared himself the head of the Church of England. The split allowed Henry to leapfrog from one marriage to another in search of a male heir: He annulled two marriages and had two of his other wives executed, including Anne Boleyn, the former mistress for whom he had rejected papal authority in the first place. (Another wife died after giving birth.)

The vespers service on Tuesday was originally conceived to celebrate the palace’s 500th anniversary and the chapel’s musical heritage. The prayer was led by Britain’s most senior Roman Catholic cleric, Cardinal Vincent Nichols, and by Bishop Richard Chartres of London.

John Studzinski, founder of the Genesis Foundation, an arts charity that helped organize the service, said, “Dialogue between faiths is much needed and welcomed in these turbulent times.”

The Chapel Royal of Hampton Court, about 15 miles southwest of Central London, hosted some of the most crucial moments in the fickle love life of Henry VIII. The capricious monarch, who grew portly in later life and was known for his penchant for lobster, porpoise and custard, secretly married Anne Boleyn there despite the Catholic Church’s refusal to grant him an annulment from his first wife, Catherine of Aragon.
After the marriage, Parliament passed the Act of Supremacy in 1534, which allowed Henry to declare himself head of the Church of England.

Henry VIII had Anne executed at the Tower of London in 1536 after a court investigation charged her with witchcraft and adultery with several men, including her brother.

The Chapel Royal of Hampton Court also hosted the baptism in 1537 of the son of Henry and Jane Seymour, Anne’s lady-in-waiting and the king’s third wife. Jane died soon after from complications related to the birth.

It was also at Hampton Court that Henry signed the annulment of his marriage to Anne of Cleves, his fourth wife, in 1540, just six months after their wedding.

He followed that up with a fifth marriage, this time to Catherine Howard, who was Anne Boleyn’s first cousin. But when scandalous accusations were made against Catherine in a letter addressed to the king and placed on his royal seat at the palace, Henry VIII also had her beheaded at the Tower of London.

Henry married Catherine Parr, his sixth and last wife, at the Chapel Royal in 1543. Henry died in 1547; she managed to outlive him by less than two years.