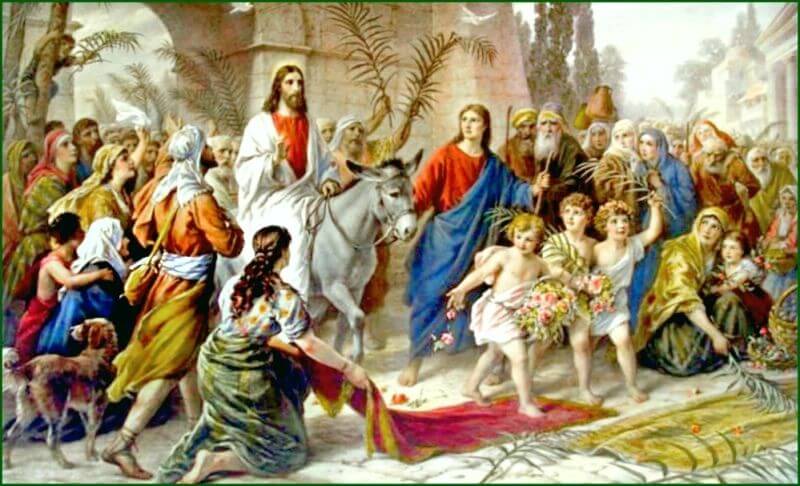 Rejoice greatly, O daughters of Zion! Shout, daughters of Jerusalem! See your king comes to you; righteous and having salvation, gentle and riding on a donkey, on a colt, the foal of a donkey. – Zachariah 9:9

Christians mark their Holy Week starting on Palm Sunday (March 20 in 2016) and concluding on Easter Sunday which celebrates the resurrection of Christ on the third day after his death on the cross. Palm Sunday showcases the kingship of Christ and commemorates his triumphant riding into Jerusalem sitting on an ass. The Biblical narrative of this event is brief. As Jesus was going up to Jerusalem, he took his 12 disciples aside, and on the way he said to them, “Behold, we are going up to Jerusalem; and (he) will be delivered to the chief priest and scribes, and they will condemn him to death”.

When they drew near Jerusalem and came to the Mount of Olive, Jesus sent two disciples, saying to them, “Go into the village opposite to you, and immediately you will find an ass tied, and a colt with her; untie them and bring them to me”. The disciples went and did as Jesus had directed them. They brought the ass and the colt. They put garments on them and Jesus sat thereon. Most of the crowd spread their garments on the road while others cut branches from the trees and spread them on the road. The crowds that went before him and that followed him shouted, “Hosanna to the son of David! Blessed is he who comes in the name of the Lord! Hosanna in the highest!”

When he entered Jerusalem riding on a colt, all the city was stirred, saying, “Who is this?” The crowd said, “This is the prophet from Nazareth in Galilee”. Jesus entered the temple and drove out all who sold and bought in it and he overturned the tables of the money-changers and seats of those who sold pigeons. He said to them: “It is written, ‘My house shall be called a house of prayer’; but you make it a den of robbers”. This is the Biblical account of one-day demonstrated kingship of Jesus. Its commemoration on Palm Sunday is one of the highlights of church liturgy..

During the triumphant entry of Jesus into Jerusalem, the crowds welcomed him spreading olive branches on his path and also waving them – as was then customary while welcoming kings. In places like India where olive trees are not native to the land, the abundantly growing palm trees provide a substitute for olive branches. The tender (yellow) palm fronds are blessed by the priests and distributed to the congregation. During the blessing ceremony, one of the prayers is: “Lord Jesus Christ, our King and Redeemer, bearing these palms we have sung your solemn praises; grant in your mercy that wherever these palms are brought, there the grace of your blessing may be poured out, every wickedness and deceit of the evil one may be set at naught and the protection of your right hand rest on those whom you have redeemed…”

The public display of authority and the adulation of the crowds on Palm Sunday galvanised the Jewish priests and scribes to corner Jesus. They later accused him of claiming kingship and pleaded with the Roman Governor, Pilate, to condemn him to death on this ground. But, Pilate could not pin down Jesus on his kingship. When Jesus stood before Pilate, the latter asked him, “Are you the king of the Jews?” Jesus answered, “You have said so”.
There is one instance in the Bible where his view on temporal kingdom is reflected. The Pharisees were plotting to trap Jesus by setting himself up against Caesar, the Roman Emperor who also ruled over the Jewish land through his Governor, Pilate. They sent their disciples who addressed Jesus thus: “Teacher, we know that you are true, and teach the way of God truthfully, and care for no man; for you do not regard the position of men. Tell us, what you think. Is it lawful to pay taxes to Caesar, or not?” But Jesus, aware of their malice, said: “Why put me to the test, you hypocrites? Show me the money for the tax”. And they brought him a coin and Jesus said to them, “Whose likeness and impression is this?” They said, “Caesar’s”. Then he said to them, “Render therefore to Caesar the things that are Caesar’s and to God the things that are God’s”. When they heard it they marveled; and they left him and went away.