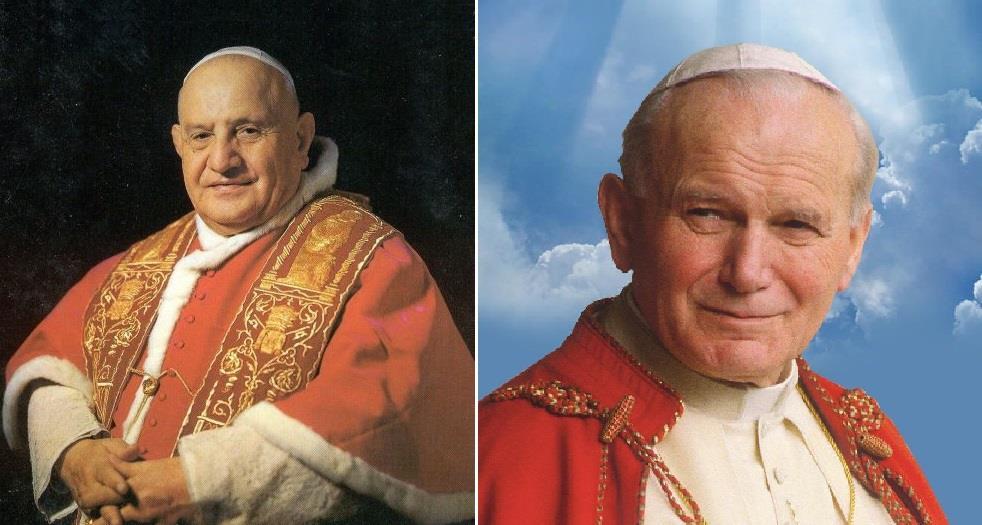 Image from Post Regarding Popes John Paul II, John XXIII to be declared saints in April

FoxNews.com this June 30, 2004, file photo, Pope John Paul II blesses Msgr. Sean Patrick O’Malley, Archbishop of Boston, during the weekly open-air general audience in St. Peter’s square at the Vatican. Among the eight cardinals Pope Francis chose as his new “kitchen cabinet,” only one is from North America: Boston Cardinal Sean O’Malley. The panel of cardinals has planned to meet at the Vatican for the first time Oct. 1, 2013. (AP)

Francis announced the date during a meeting with cardinals inside the Vatican’s Apostolic Palace, and said the canonization is set for April 27, 2014.

Francis had announced in July he would canonize two of the 20th century’s most influential popes together, approving a second miracle attributed to John Paul. John XXIII has been also credited with a miracle, but Francis has bended the Vatican rules by deciding that John didn’t need a second one to be canonized.

The beatification of John Paul – which is a step toward sainthood – was started by his successor, Benedict XVI, after John Paul died in 2005.

The Vatican said at the time that it waived its usual five-year waiting period to begin the process because of “exceptional circumstances,”according to The Guardian.

A first miracle was attributed to John Paul in 2011, in which the Vatican said a French nun that was dying of Parkinson’s disease was cured after she and other nuns prayed for the intercession of John Paul.

John Paul’s second miracle was approved by Francis three months ago. A 50-year-old Costa Rican woman said she was cured of a brain aneurysm after a photo of John Paul appeared to talk to her, The Guardian reports.

John XXIII was pope from 1958-1963 and called the Second Vatican Council which transformed the church, according to the BBC.

He also introduced vernacular to replace Latin in church Masses.

Analysts have said the decision to canonize John Paul II and John XXIII together was aimed at unifying the church since each has his own admirers and critics. Francis is clearly a fan of both: On the anniversary of John Paul’s death this year, Francis prayed at the tombs of both men — an indication that he sees a great personal and spiritual continuity in them.

A spokesman for Poland’s bishops’ conference, the Rev. Jozef Kloch, said the dual canonizations would stress the fact that John Paul II continued the ideas introduced by John XXIII, who called Vatican II.

The Vatican on Monday said retired Pope Benedict XVI might join Francis in the saint-making ceremony, noting that there was no reason why Benedict should have to watch the ceremony on TV.

“There’s no reason — either doctrinal or institutional — that he couldn’t participate in a public ceremony,” the Vatican spokesman, the Rev. Federico Lombardi said. “I don’t have any reason to exclude it.”

Benedict, who became the first pope in 600 years to retire when he stepped down in February, had said he would spend his final days “hidden from the world” in the Vatican monastery.

But he has taken on a more public profile recently, writing a letter to an Italian atheist that was published last week in Italy’s La Repubblica newspaper and appearing with Francis over the summer at a ceremony to unveil a Vatican statue.

Originally, the canonization was expected to have taken place Dec. 8. But Polish bishops complained that a December date would make it difficult for Polish pilgrims to come to the Vatican by bus along snowy, icy roads. As a result, the first Sunday after Easter was chosen instead — a feast day established by John Paul himself.

It was on that same feast day — Divine Mercy Sunday — that John Paul was beatified in 2011, drawing 1.5 million pilgrims to Rome.

John Paul made Jorge Mario Bergoglio — the current Pope Francis — a cardinal. Francis’ immense popular appeal has also been likened to that of John XXIII, dubbed the “good pope.”

The Associated Press contributed to this report.