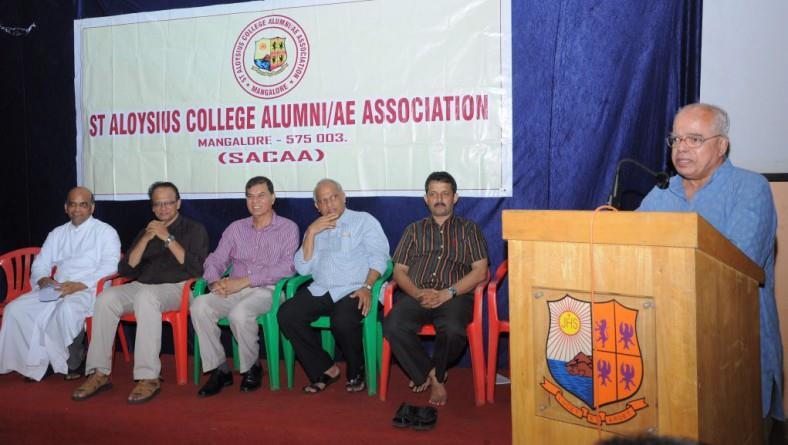 St. Aloysius College Alumni/ae Association (SACAA) has pledged substantial financial support for the under-construction Olympic-class swimming pool project on St. Aloysius College campus, Mangalore on September 20, 2013. In his address at the 111th annual general meeting of the Association, its President, Mr. Michael D’ Souza, outlined the efforts being made by SACAA, spearheaded by the fund-raising committee convener, Mr. N. G. Mohan, to collect funds in India and abroad. He said that the estimated cost of the project has escalated and has now crossed R. 50 million. While part of the cost would be from grant from University Grants Commission, the major cost would have to be secured by the college. SACAA has pledged to support and has already collected funds and secured commitments of support. The President said that shortly Fr. Francis Almeida, Vice Principal of the College and Mr. Arthur D’ Souza, ex-President of SACAA, would visit UAE cities to meet prospective donors, especially ex-Aloysians.

Addressing the AGM, Fr. Denzil Lobo, Rector of St. Aloysius College Institutions and Patron of SACAA, said that SACAA members should help in projecting the image of the college to attract students from all over India and abroad. Alluding to the prospect of the college becoming an independent university in a couple of years, he stressed that St. Aloysius campuses have impressive infrastructure to start and sustain such a university.

Also speaking at the AGM, Fr. Swebert D’Silva, Principal of the College and Director of SACAA, stressed the importance of the alumni to act as ambassadors of the college to the outside world and urged them to get involved with the developments in the college by volunteering as consultants in various fields – specially on retirement.

Fr. Almeida, who is also Deputy Director of SACAA, urged members to play a greater role, and by more members, in advancing the mission of the Association.

While the President welcomed and Mr. John B. Monteiro, Secretary, proposed the vote of thanks, the gist of activities of the Association during the previous year  were presented by Dr. Richard Gonsalves, Vice-President and proceedings were progressed by Mr. Naveen Maschrenhas, Treasurer.