Latest News
Home Catholic World The god of all things

The god of all things 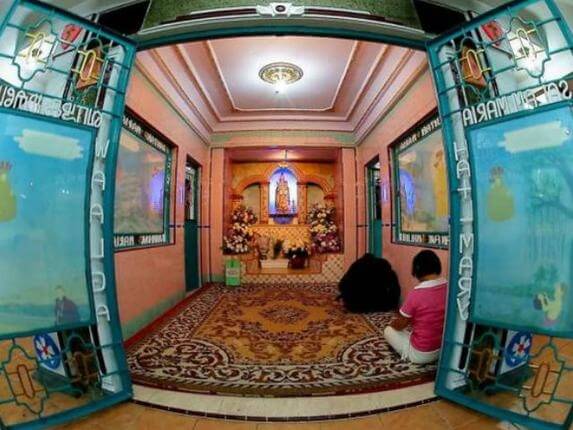 Image from post regarding The god of all things

A fascinating Catholic Church in a Muslim majority area in north Sumatra is built in the style of a Tamil Hindu temple.

Graha Maria Annai Velangkanni rises up out of the working class suburbs of the Indonesian city of Medan, like the apparition it is named after. As a Catholic Church in a Muslim-majority area of north Sumatra built in the style of a Tamil Hindu temple, it is, quite literally, chimerical.

Father James Bharataputra, the 67-year-old Jesuit Priest who conceived of and constructed this church, rushes to greet me as I enter the compound. Barefoot and dressed in a spotless white habit, Father James recounts his story with dramatic flair.

Born in 1938 in a town near Madurai he entered the Jesuit order in 1957 with dreams of serving in a mission abroad. In 1966, his goal was realised when he was sent to work with Tamil communities in Malaysia. Shortly after his arrival, however, the Malaysian government passed an immigration law against foreign missionaries and so his superiors dispatched Father James to Indonesia. He has remained in the archipelago ever since, spending several years each in Java, West Papua, and Sumatra. Father James became a naturalised Indonesian citizen in 1989.

The majority of his time over the last three decades has been spent among the Tamil diaspora in north Sumatra. There are around 60,000 people of Indian origin on the island of Sumatra, according to Basir Ahmed, the Indian Consul General based in Medan. The majority of these are Tamils, who trace their roots in Indonesia to the second half of the 19th century. At the time, Sumatra was under Dutch colonial rule and several Dutch-run plantations, in particular the tobacco growing company, Deli Maatschappij, began to bring Tamils from Nagapattinam, Madras, and Karaikal, as indentured labourers to work in their estates.

Tamilians in Sumatra include large numbers of Hindus and Muslims, and a minority of Christians. When Father James first moved to Medan in 1972, there were around 700 Tamil Catholics resident in and around the city. They were, he says, an economically backward and deprived group, with barely 10 per cent completing secondary school and living a ghettoised existence.

Father James bought the land that the church currently stands on in 1979 with the aim of persuading Tamil Catholic families to shift there, away from the ghettos that they lived in. But they refused to move and the land lay fallow for the next couple of decades.

It was only in 2001 that Father James embarked on the construction of the church, following what he called a “miracle”. The money to build the church had been raised by soliciting donations from the community.

Father James had stored these donations in cash at the home of a friend in Medan. But an accidental fire gutted the entire home. The only objects to survive uncharred were the church construction funds, which had been wrapped in plastic, and two copies of the Bible.

Graha Maria Annai Velangkanni eventually opened its doors in 2005 and since then has gone on to become a major regional attraction. “The reason I called it graha, or house, rather than a church, is because I want it to be open to everyone,” Father James explains. He says that head-scarved Muslims, photo-snapping tourists and devout Christians are equally common sights on the grounds.

The church is named after a Tamil village on the Coromandel Coast called Velankanni, a major centre of pilgrimage for India’s Catholics, in India. It is here that a shepherd boy is believed to have seen an apparition of Mary and Jesus in the 16th century.

While the original basilica is constructed in the Gothic style, its Sumatran namesake is architecturally unique. The structure consists of a community hall on the ground floor and a space of worship, designed like a conventional church, on the first floor that is reached by walking up a circular ramp. A seven-storey, multi-coloured tower, in the style of a gopuram tops the building, triangulated by domes that Father James says are inspired by Mughal architecture.

Within the fan-cooled church the hush is broken by the keening of a devotee who rocks back and forth at the foot of a statue of Jesus. The high walls have quotations from the Bible painted in four languages: Indonesian, Tamil, English and Chinese (Medan also has a substantial Chinese origin population).

As the sun begins to set, Father James retires to a modest chapel to the side of the main structure where he leads the mass. The service is conducted in Indonesian, the Tamil Christian diaspora having largely lost the ability to speak Tamil over the decades. The congregation is a mixed one, with several local Sumatrans in attendance. As Father James leads them in prayer, loudspeakers from the neighbouring mosque begin to blare the azaan, momentarily drowning out the Jesuit’s words. But the call and response of the mass proceeds without interruption.

Later, the lights are turned on and the church’s gopuram set ablaze in coloured fairy lights, dazzling against the night sky. As I drive away, I see a young Chinese woman in skin-tight jeans snapping a selfie in front of the structure.

Pallavi Aiyar has spent over a decade reporting from China, Europe and Indonesia and is a Young Global Leader with the World Economic Forum.