Latest News
Home Vatican The Great Reformer: Francis and the Making of a Radical Pope by Austen Ivereigh, review: ‘invaluable’

The Great Reformer: Francis and the Making of a Radical Pope by Austen Ivereigh, review: ‘invaluable’ 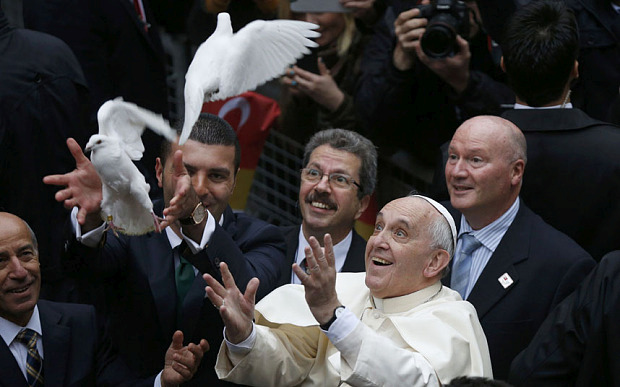 Image from Post Regarding The Great Reformer: Francis and the Making of a Radical Pope by Austen Ivereigh, review: ‘invaluable’

Is Pope Francis the great reformer he purports to be or does his charisma blind us to his beliefs, asks Nicholas Blincoe

Just as worldly politics break down into left and right, the politics of the Vatican divide into riformisti and rigoristi, the reformers and the unyielding. The Cold War brought the rigid papacy of Pope John Paul II, a style which lingered under his lieutenant, Benedict XVI. The election of Jorge Mario Bergoglio as Pope Francis saw the pendulum swing back to the reformers.

In this invaluable new biography, Austen Ivereigh reveals the riformisti were so determined not to be outflanked following Benedict’s surprise resignation in February 2013 that they toured Rome, courting votes ahead of March’s papal conclave. However, on Ivereigh’s account, Bergoglio became the reform candidate chiefly because he had been Benedict’s closest challenger, eight years earlier.

Is Francis the liberal we take him to be? Soon after his election, he gave interviews suggesting the church had become too focused on gays and abortion; this proved to be papal spin, however, as Francis quickly reaffirmed the conservative line on these and other issues, such as the ordination of women.

If his Papacy relies solely on his power to charm and surprise (“Listen up,” he told a congregation in Rome, “If the Church is alive, it must always surprise”) the aura of reform will vanish like the white smoke that signals the election of each new Pope. Ivereigh believes that Francis is a more revolutionary choice than his supporters among the riformisti know. He argues that the pope comes ready-made as a radical, shaped by the experiences of living as a Jesuit through one of the bloodiest times in Argentina’s history.

Francis was born in 1936 in Buenos Aires. He could hardly be more Argentinian. He is passionate about his football team, San Lorenzo; an enthusiast of the tango; a one-time friend of the late Jorge Luis Borges; and a committed drinker of mate, the dubious herbal drink.

Yet he is the child of Italian immigrants, and his address to the cardinals within the conclave was delivered in fluent Italian, which ensured it was widely understood. It reads like a campaign speech. He offered the cardinals a vision of the church that takes risks, looking outwards to the margins rather than inwards to itself, a stance he derided as “theological narcissism”, conjuring an image of his predecessor, a theologian known for his foppish red loafers. The speech made it clear that Francis represented a reforming trajectory.

Francis is not only the first South American but also the first Jesuit pope, a group John Paul viewed with suspicion.

The Jesuits have a long and, at times, heroic history in South America, as the society’s all-time favourite film, The Mission (1986), makes clear.

During the Pinochet-like junta of General Ongania in the Sixties and Seventies, the Jesuits became associated with Liberation Theology, in which the traditional Jesuit “preferential option for the poor” – that is, a favouritism towards the disadvantaged – was recast in explicitly revolutionary terms. Priests went to work in garrison-like barrio communities and became associated with armed groups.

Ongania’s rule morphed into the so-called Dirty War, a time when a terror government in Buenos Aires systematically murdered anyone suspected of organising politics.

By this time, Bergoglio was the leading Jesuit in Buenos Aires. He was accused by one radical priest who had been captured and tortured by the regime of not doing enough to protect his priests, but the evidence points the other way.

He supported and hid fugitive priests and opposition figures, while keeping the Jesuit institution alive. Liberation theology is linked to Marxism, which is why John Paul loathed it. Ivereigh argues there is another strand, a post-Peronist style of left-wing pragmatic populism. He argues Francis is a key figure in this tradition, and so when the riformisti settled upon him as their candidate, they found themselves with a seasoned political operator.

According to Ivereigh, Pope John Paul was “monarchical”, an authoritarian ruler shaped by the Cold War in Europe. John Paul’s friends in government could count on his loyalty without having to pay any special attention to his constituency.

His eastern bloc enemies, meanwhile, knew he would never bend, which led them to entrench their own doomed positions.

John Paul was a wartime Pope. On a day-to-day level, Francis lived through even more violent times, yet he emerged as a negotiator rather than a warrior.

He wants to turn his worldwide constituency into a clamorous federal republic that forces individual governments to pay attention, while simultaneously signalling that the church is capable of reaching deals whenever possible. His legacy depends upon him reinvigorating this noisy republic, after the years of unyielding rigoristi control.