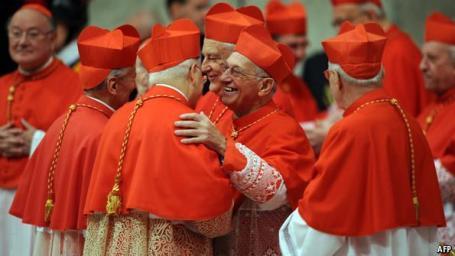 POPE FRANCIS is to create his first batch of cardinals on February 22nd. The 19 men will join almost 200 others as members of the Sacred College of Cardinals. They will wear scarlet vestments including a red skullcap known as a zucchetta and a red, four-pointed cap or biretta. They will be addressed as “Eminence” and often described as “princes of the Church.” This is no idle flattery: Pope Urban VIII decreed in 1630 that their secular rank was equivalent to that of a prince.

The first people to be called cardinals, in the 6th century, were the deacons of the seven districts of Rome. The title was later extended to the most senior priests in the city’s parish churches and the bishops of the seven dioceses around Rome. It was not until much later that non-Italians were given the title and an equivalent status to the cardinals of Rome. Today, the cardinals fall into three main categories: archbishops of important sees around the world; senior Vatican officials, and distinguished (and invariably elderly) clerical intellectuals such as theologians. In honour of the origins of the title, members of the Sacred College are divided into cardinal–bishops, cardinal-priests and cardinal-deacons. But the hierarchy has little practical significance when it comes to choosing a pope (and popes must be chosen from among the cardinals). Pope Francis, for example, was a cardinal-priest.

Even though cardinals have precedence over other Catholic prelates, what they hold is more of a title than a rank. They nevertheless have two specific duties. Those under the age of 80 are entitled to take part in papal elections: so-called Conclaves. And cardinals of all ages are regarded as advisors to the pope, even if their importance in this respect has become increasingly random. Back in the 13th century, Innocent III conferred three times a week with his cardinals in a meeting known as a consistory. More recently, Popes have more often relied for advice on individual cardinals (usually members of the pontifical administration or Roman Curia) or others, like their secretaries, who were not even bishops, let alone cardinals.

Pope Francis seems to be edging towards a greater systematic consultation with his cardinals. In the two days before the ceremonial appointment of the latest ones, he is to hold a consistory at which he wants to get their views on the family. He has also created a new body of eight cardinals whose task is to draw up a plan for the reform of the Roman Curia. All but one is an archdiocesan cardinal from outside Italy. Nicknamed the pope’s G8, the new commission was seen in Rome as a way of circumventing the traditionally reactionary Vatican bureaucracy and counterbalancing the dominance of Italians both within the bureaucracy and the Sacred College. Under the traditionally minded Pope Benedict, the proportion of Italian cardinals returned to the level of the late 1970s. His successor has begun to redress the balance: 14 of his 19 new appointees are from outside Italy. He is anxious that, wherever they come from, their appointments should not go to their heads. In fact he wrote them a letter to tell them that becoming a cardinal “did not signify a promotion, an honour nor a decoration: it is simply a service that demands a broader vision and a bigger heart.”